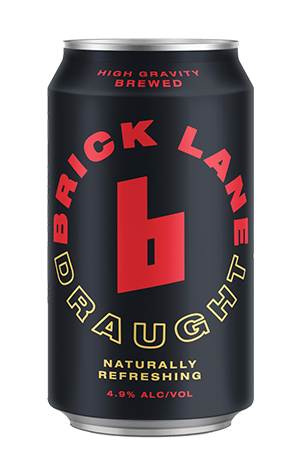 Throughout 2020, the brewers at Brick Lane have been playing around with hops, fruit, haze and acid but their latest release has a rather different brewing tradition in mind: the Australian draught. The black and red label has a striking simplicity and given this is a beer that’s “high gravity brewed”, provides “superior crispness and “fuller refreshment”, it’s pretty clear this is one intended to be bought by the six-pack, if not the case.

The brewery wants you to share it with mates too, presumably those who are used to drinking other beers with Draught or Bitter in their name. Unfortunately, I’m not sure dropping off six-packs of beer across Melbourne's northern suburbs because head brewer Jon Seltin asked me to right now would really impress Dan Andrews, so I can’t say what my VB drinking mates make of it. What I could say is, if we were allowed barbecues it’s certainly a case I'd take to one, drop on a bench, crack one and say to all present: “Have at them”.

But all of my hypothetical friends at this hypothetical barbecue would be remiss in drinking it straight from the tin, as we’d miss just how golden and clear it pours with a perfectly white head. What we would still get, though, is a light spice paired with esters from the yeast that always remind me of Euro-lagers, a bready but crisp body and what’s really quite a substantial bitterness charging through at the back. We would also still enjoy the friendships we forged at barbecues past and isn’t that the real treasure-coloured beer?