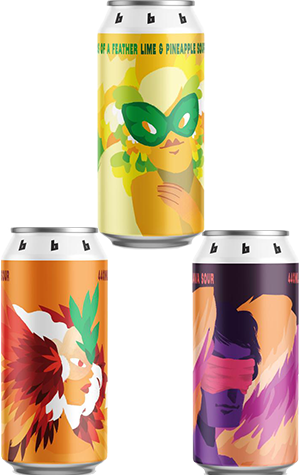 To welcome summer, Brick Lane unleashed their fruited sour series Birds Of A Feather, three different beers featuring six different fruits and built upon one base recipe. They might well be Brick Lane's most eye-catching cans too, with each colourful beer showcasing different feathery characters. Like many modern iterations of the style, they’re not particularly sour; instead, it’s largely the featured fruits that do a lot of the heavy lifting, while the 6 percent ABV means they're all rather fluffier than many of their peers, even though you're unlikely to notice the booze level.

In the case of Lime & Pineapple, it brought to mind bags of pineapple chunks you can pick up on the streets of South East Asia, with the lime lifting things further and adding a little market garden grassiness to the beer. Aside from fresh fruit chunks, the flavours come across almost candy like too, though they disappear quickly and the accompanying slight tartness makes the beer one that's more refreshing than sweet juice.

For Mango & Lychee, it’s the former of the two fruits that really drives the beer (as mango tends to) and it comes across as fleshy and quite ripe. The lychee, on the other hand, adds a perfumed cordial layer, with a slight sweetness that brings to mind opening a can of the fruit in syrup.

That brings us to Passionfruit & Guava, where the passionfruit aroma is so strong it’s akin to sticking your entire nose inside one. To taste, the guava is a little more prominent and pear-like, while its sweetness cuts passionfruit's more natural tartness and makes it three for three feathered and fruit-laden, more fun than funk, beers.