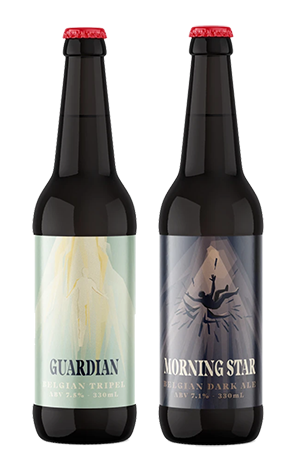 Often it’s music references that seem to drive Brick Lane’s naming conventions but, for their twin releases in April 2021, the brewery instead looked to the heavens for for inspiration. Given the idea – and the yeast – heralds from Belgium’s Trappist breweries, those religious undertones seem particular fitting, as too does the fact both come in bottles as opposed to the regular schedule of Brick Lane releases in cans.

Guardian is the lighter coloured – though boozier – of the two: a tripel featuring bright lights holding a skybound figure in the sky on the label. The beer inside is equally golden and bright in its hue too – a beer that’s both complex and easy-drinking, where yeast secured from a brewery in the Ardennes region provides a spicy and peppery mix of esters that includes cloves, fresh-cracked pepper, bubblegum and pear. There’s also a touch of banana and the lightest of honey and, while it might be 7.5 percent ABV, there’s not a trace of heat from the alcohol; instead, Guardian is clean, drinkable and disappears fast from the glass.

Morning Star, on the other hand, is where it all comes crashing down. Well, on the label at least, which depicts a fall from grace; the beer itself is as delicate, nuanced and easy to drink as its contemporary. It pours a deep amber colour and, along with those spice, clove and fruited notes it shares with Guardian, Morning Star also serves up a rich blend of raisins, plums and a slightly bready note from the malt.