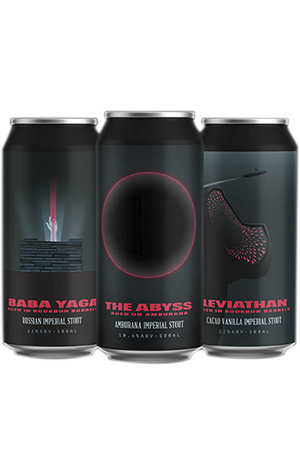 For such a sizeable brewery, Brick Lane certainly seem keen to release myriad beers across as short a time as possible. In a little over a week, they’ve gone for a New Zealand IPA, launched a low-alc series with a 1.1 percent hazy pale ale and given us three barrel-aged imperial stouts. It’s the last of those we come to now, with the beers known as the Trilogy of Fear and being the first barrel-aged releases from the brewery, which given that fact, are fittingly based around a fear of the unknown (not to mention 80’s horror flicks).

As well as being a fearsome and supernatural old woman who lives in a hut standing on chicken legs, Baba Yaga is arguably the most straightforward of the trio, being aged in bourbon barrels shipped from Kentucky while still dripping in the spirit. It should be no surprise then, that the beer itself is also heavily covered in bourbon character, with vanilla, caramel and butterscotch all blending against the beer’s base which features roasted malt, dried fig and dark chocolate which follows through with a slightly bitter finish.

Also spending time in bourbon barrels was Leviathan, which offers cacao nibs and vanilla to the great beast from the deepest and darkest parts of the ocean. It should therefore figure that Leviathan would be a fair bit sweeter than Baba Yaga but that’s not quite the case. Instead, the vanilla takes centre stage and offers a smooth but not overly sweet counter to the beer's elements of chocolate, burnt sugar and quite prominent roasted elements.

Finally, we stare into The Abyss which has spent time on a wood not as closely associated with big dark beers in Australia; Amburana. Also known as Brazilian oak, Amburana is commonly used to age the sugarcane spirit Cachaça while it's more recently found fans in American brewers like Dogfish Head and Three Weavers. It’s a wood that’s known to impart gingerbread, herbal and savoury flavours and here in the Abyss, all of these are quite present. It’s a complex and perfumey mix where there are hints of coconut, gingerbread, cinnamon and a herbal element all rolled into one, while a touch of oxidation adds to the beer’s sweetness and provides slightly cherry and port-like notes. You should indeed then stare long into The Abyss; there’s a lot to find.