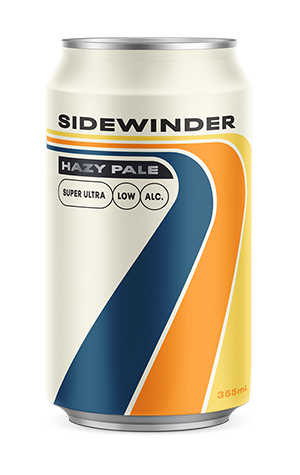 Brick Lane have been brewing alcohol-free beers for a range of contract partners for some time, so when you look at the Melbourne brewery’s lineup, it seems there’s an ultra low ABV-shaped hole in their core range. That hole was filled midway through 2021, however, with the launch of the brewer’s Sidewinder series, named after the boats from the 1970s and featuring a can that takes you there too. Breaking a little from the norm, the first in the series isn't below 0.5 percent ABV but instead 1.1, making it 0.3 standard drinks per can.

As for what's contained within the retro tin, the first Sidewinder is a hazy pale, with the idea being to let the little beer pack a sizeable punch created by American hops in Citra, Mosaic and Centennial. Where it does come closer to that territory is with its fluffy, soft mouthfeel that comes from the inclusion of rolled oats in the malt bill, which provide a smooth base upon which that trio of hops present notes of citrus, stone fruit and a tropical touch of lychee and mango.

WIN! If you're reading this in time, you can win one of ten cases of Sidewinder Hazy Pale in an exclusive competition for Crafty Cabal members that closes on November 3.