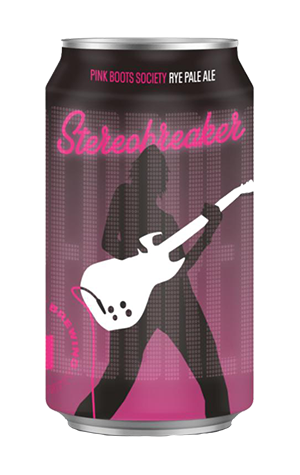 With beer names like One Love and Supernova, we’ve long suspected there’s a large number of music lovers working at Brick Lane and their latest limited release seems to prove that beyond any doubt. Or maybe we've worked out who the biggest music fan at the brewery is, since Stereobreaker is a rye pale ale brewed by Victorian members of Pink Boots Australia and led by Brick Lane’s Emily Usher. It's a beer that's built around this year's Pink Boots Hop Blend from Yakima Chief Hops which consists of Cashmere, Ahtanum, Citra, Loral and Sabro while the name refers to breaking stereotypes and smashing ceilings and to help Pink Boots continue to do that, Brick Lane is donating close to $10,000 from the proceeds of the beer to the not-for-profit.

As for the beer inside, Emily and PBS brewed a pale with a relatively complex malt base - of munich, crystal and rye - which still allows the flavours from the hop blend to take centre stage. It means there's a touch of sweetness and slight spice to Stereobreaker but largely, it's a beer led by notes of oily citrus, herbal and piney characters and softer levels of coconut and mint.