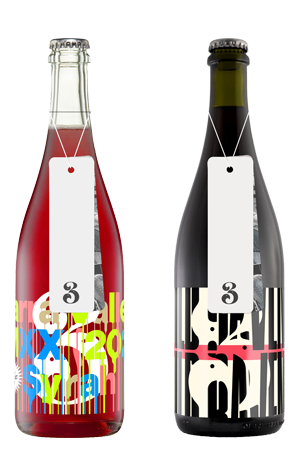 One of the first things I'll likely be doing once restrictions ease sufficiently in Melbourne is to hit up the Thornbury triangle formed by Moon Dog World, 3 Ravens and Jamsheed's venues. The last two of these worked together on the second 2020 vintage Nat Rav release, one featuring Yarra Valley syrah skins, which were refermented in a blend of 21-month-old barrel-soured light golden ale and a nine-month-old barrel-fermented sour red ale. It's since been blended with some fresh Aussie pilsner and a rye farmhouse ale to reach the end product.

And what you get with 2020 Yarra Valley Syrah is a liquid that's deep beyond crimson hue and possesses a stemmed, whole bunch kind of vibe that, to me, takes the experience almost into merlot territory. The presence of the sweet aged malts, a mild hint of acetic acid and a little earthy funk become more apparent as it warms.

The Cherry Red addition to their Wild Ravens series is a barrel-fermented sour that’s been aged on cherry skins and stones that were effectively the waste from a juice production plant. The average age at time of bottling was ten months and, while the beer features local ingredients, it looks to Roeselare, Belgium, for inspiration. It’s tart and sweet at once, dry and fruity too, awash with cherries, a little vinegary (some of their house made vinegar is in there too), and with some spicy, toffee malt flavours swirling within too.