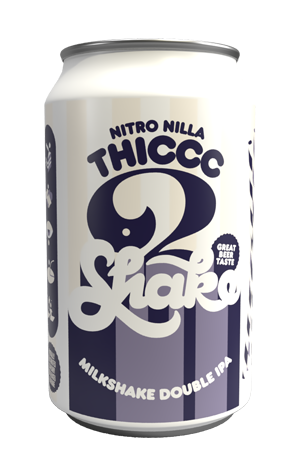 They're a remarkably diverse operation are 3 Ravens. There's a tight core range of "normal" craft beers, augmented by their flagship Juicy IPAs. Then there's the barrel-aged, mixed ferment Wild Ravens lineup and wine hybrid Nat Ravs that come accompanied by novellas from the brewers. And then there's nonsense like Nitro Nilla Thicccshake, a nitro-dosed, vanilla- and lactose-laden, milkshake double IPA.

If you've ever wanted to know what it would look like if you carbonated the Yarra, give one of these cans a shake and pour it into a glass. Yep, it's like watching fizzy dredged river water settle. There’s some fruitiness from the triple dry-hopping with New World varieties attempting to poke through, at least on the aroma, and a lick of oily bitterness right at the denouement, but they're the only real signs this is anything like a double IPA in the Platonic sense. For the main, it’s like melted fudge poured over vanilla ice cream. With small bubbles.