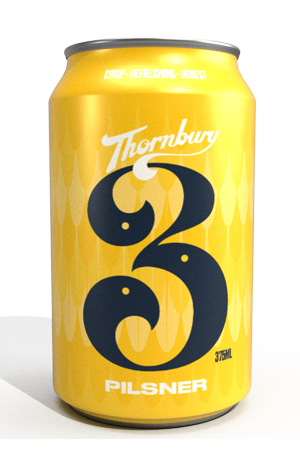 The forerunner for this entry in 3 Ravens' CAW range first appeared back in 2016, becoming a stable at their bar and popular with many a venue within their home 'burb and surrounds. It's since evolved a little, switched from Thornbury Lager to Thornbury Pilsner, and can now be found much further afield too.

At heart, it remains essentially the same, however: an Aussie take on the traditional pilsner style that has its New World flashes thanks to the use of almost all local ingredients (HPA's deletion of Summer hops resulted in a de-bittered version of Simcoe from the US becoming the stand-in) yet in character retains plenty in common with those you'd find in Northern Europe.

Unfiltered it may be, yet in the glass it's bright and golden, with Ella and Enigma hops contributing soft citrus, grape and melon aromas atop a bedrock of soft malts, with a distinct bitterness and touch of spice on the palate too. The result is a beer that's as tight, crisp, refreshing and sessionable a local pilsner as you'll set your eyes on – something made easier by the bold yellow cans.