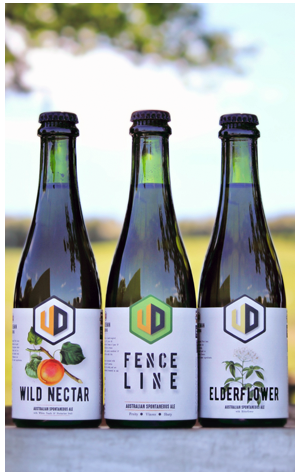 If there's one thing this trio of Australian spontaneous ales from Van Dieman suggests, it's there's something of a house – or should that be farm – character developing among the gently undulating fields south of Launceston. While there are distinctions to be drawn, despite the different methods by which they came to be, their different ages, and different ingredients, there's a clear line to be drawn between the three too.

Chances are you won't try all three at once like we did when sampling but, should you opt to, the most sensible order may not be to work upwards through the ABV range but instead to focus on the age of the liquids in each bottle as that appears to relate to their intensity on the palate. That would mean starting with Elderflower, inoculated in the brewery's coolship in December 2019 with elderflower flowers and beeswax before spending three months in oak. Like its stablemates, it pours a deeply hazy, almost cloudy, pale yellow and features a sweet, prickly acidity as a key characteristic. Drier, softer and wearing its time in oak more creamily than the others, it still possesses an intense, syrupy sweetness that outlasts its sharper attributes.

I'd move to the highest ABV beer next: Wild Nectar, a young spontaneous ale aged in oak with white peach and nectarine for ten months then blended with a two-year-old ale for a further five months in barrels. It's worth mentioning the former was laid down in summer rather than in the cooler months, as brewery founder Will Tatchell took advantage of a cold burst sweeping through Tassie. The fleshy stone fruit aromas come through clearly, like that of ripe fruit that needs eating now and not a moment later. The appearance and acidity aren't too far removed from Elderflower, but it's a little fuller in body, rounder in texture and fruitier in personality.

Which leaves Fence Line, the lowest in ABV, oldest in terms of liquid, and most challenging for the olfactory system. Aroma wise, this lambic-inspired blend of one, two, and three-year-old spontaneous ales – an attempt to recreate past release Unpredictable Spring – is like a funky farmhouse cider or perry reduction, with an acidity that's prickly, sweet and bracing; one team member mentioned apple cider vinegar. There's even a spot of back palate heat like that you can get from a fiery ginger beer, completing the impression of an intense, funky fruit juice, and suggesting as Will's ales get older, they only get feistier.

Crafty Cabal members can save 10% on orders