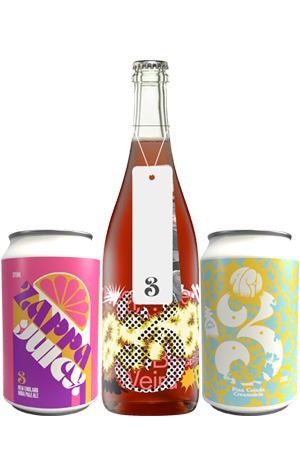 Sometimes a name tells you everything you need to know, and that's certainly the case with Zappa. The newly-arrived neomexicanus hop variety is one of the more avant-garde you'll come across, a mélange of the unexpected, and thus has produced a Juicy unlike any other in 3 Ravens' long line of Juicies. Zappa Juicy – pretty clear and golden rather than overly NEIPA-y in appearance – is the most radical and out there to date. Sure, there's a bit of contemporary fruitiness at play but it’s also grassy, unripe, herbaceous. There’s the creaminess of a berry ice cream, a drying vegetal character, onions, a woodiness (which was auto-corrected to woodbines in my tasting notes; we're not quite at that point yet). Admired for its perfections this is not; wild it is. Not for the masses, or probably long for this world, it's the Sorachi Ace of New Mexico, yet more layered.

Equally convoluted is the Nat Rav Bloody Shiraz Negroni, a collaboration of sorts featuring a cast of thousands. Start out with a beer being aged in oak with horehound, add in the spent shiraz skins used to make Four Pillars' gin of the same name, an imperial wild witbier that had been resting on orange zest, and a desire to make a Negroni beer, and you have a 9.6 percent ABV hydra-hybrid. The cocktail's character is there from the off, albeit not as dry, potent or as bitter as an actual Negroni, while the juiciness of the grapes remains, joined by a bouquet of perfume and a herbaceousness that takes in strawberry gum as well as drying gin botanicals and a citrus rind intensity. Like Joseph's coat, a beer of many colours.

Completing our catch up on 3 Ravens' limited releases for November 2020 is the third in their summer Creamsicle series. Piña Colada buries most of the soft tropical sour of the Acid beer from which it was built under its beach cocktail stylings. The coconut possesses a dense sweetness that brings to mind butterscotch popcorn, while the flavours reminded the team of the Jelly Belly lollies of the same name. Sweet and creamy, with a light dusting to finish.

And if that trio doesn't sum up where we've landed at the end of 2020, what does?