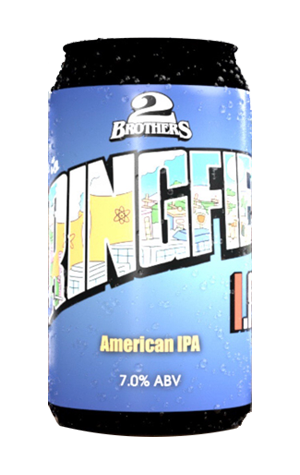 More often than not when a beer arrives bearing pop culture references, it's thanks to a pun or an attempt to grab a bit of reflected glory. With 2 Brothers' Springfield IPA, however, The Simpsons-aping label comes with good reason: brewer Dan Barbieri hails from the town and this is the first time he's been let loose on recipe design.

It's also the brewery's first ever hazy IPA – typical of 2 Brothers and their desire to do what suits them rather than chasing trends – so not one you'd want to screw up, given their ubiquity in craft beer circles these days. Certainly, it looks the goods and follows through on its visual promise too, with a lively, almost tangy, blend of candy and fruit juice sitting atop a base reminiscent of a lightly sticky, sweet sponge. There’s something a little earthy / grassy on the nose too – likely due to all the late additions of Amarillo, Simcoe and Chinook hops – and enough bitterness to lean out and freshen up the finish. Presumably this won’t be the last beer Dan gets to design for them.