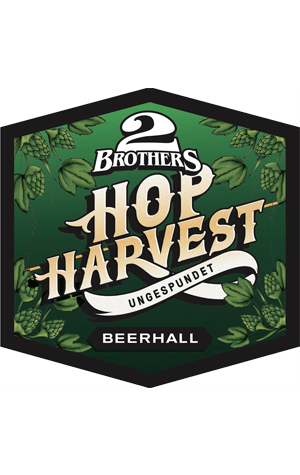 With so many breweries making fresh hop beers, how do you make yours stand out? You could, like 2 Brothers Brewing, consider brewing a lager as most brewers choose to brew harvest ales. Better yet, you could choose to brew an Ungespundet: the kind of beer with which even the more historically minded beer nerds are likely to be unfamiliar.

Ungespundet is a type of unfiltered lager historically (and still) brewed using open tanks – the term translates as "unbunged" – in the Upper Franconia region of Germany. 2 Brothers’ head brewer Ben Lee spent part of a recent holiday in Europe learning about the style and brought his newly acquired knowledge home just in time to make use of fresh Ella from the local hop harvest.

If the name isn’t unusual enough, the lager itself is something of an oddity, pouring a deep copper colour and with a low carbonation. While tropical aromas and some grapefruit are there to be found, most of the flavour is driven by the malt: mostly rich caramel flavours, joined by some floral and slightly grassy characters the brewers suggest is the work of the fresh hops.