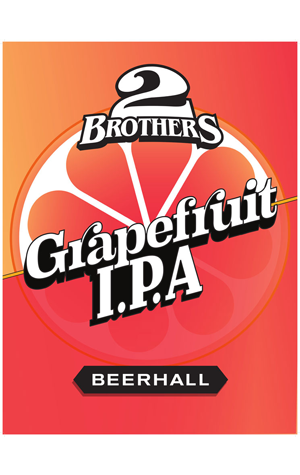 2 Brothers' Beerhall releases are the Moorabbin brewery's single batch brews and tend to head out into the world every two or three months. Doing so as summer ended in 2018 is a Grapefruit IPA that came about, at least in part, due to a serendipitous meeting with an over excited grapefruit tree.

Ed Cox, one of the 2 Brothers brewers, was a fan of Ballast Point's Grapefruit Sculpin and came upon said tree carrying an abundance of fruit. So he took some home, developed a recipe on his homebrew kit and was rather happy with how it turned out. So were his colleagues so he was granted the opportunity to scale it up. Doing so required rather more fruit, 150 grapefruits' worth of peel, in fact, which was added at the end of the boil.

The aim was to have the fruit add something to the IPA rather than dominate and Ed's aim was true, with the result a fine homage to its inspiration. The zesty, juicy fruit addition melds well the hops and malt, delivering a full, crystalline fruit flavour in which it's hard to tell where the grapefruit's influence ends and the citrusy US hops begin. There's balancing caramel sweetness and tight bitterness completing the picture, making you thankful for that overactive tree.

And select Melbourne venues on tap