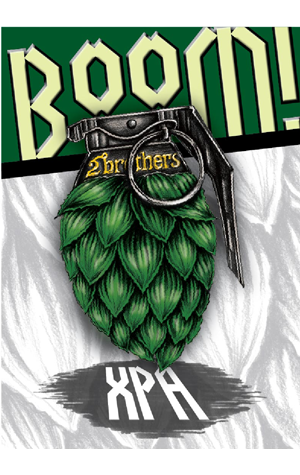 UPDATE (28/01/15): BOOM! is back for a second adventure in a slightly tweaked format. Andrew says BOOM! 2 saw the brewers "trying some new paraphernalia and a new hop separation technique. Unlike BOOM! 1, this batch is unfiltered, with 21 days of cold conditioning. Hope you like it."

THE ORIGINAL LISTING: Just the other day, it occurred to us that we hadn't seen a new beer from 2 Brothers in a fair while. Then: "BOOM!", one appeared. And it was literally: "BOOM!" as word landed from co-owner and head brewer Andrew Ong that not only was a new beer imminent, but it was a new beer called BOOM! that's borne of the repeated requests from customers for an IPA. Not that it is an IPA, however, even though it adds to the armament-based language we have for hoppy beers (hop bomb, hop bazooka) by coming complete with a hop grenade as its accompanying image. Instead, it's the latest beer to enter the much-debated no man's land between pale and IPA.

Many have opted to call their hoppier pales (or less boozy IPAs) "session IPAs" whereas here, like near neighbours Riders Brewing, they've gone for XPA or "extra pale ale". What this translates to is Andrew's attempt to "produce a beer with as much hop character [as an IPA] but with less bitterness - lending itself to longer sessions." The result is a combination of Scottish pale malt, English ale yeast and more than a pound per keg of Centennial hops, which offer up plenty of citrus and pine aromas and flavours, with a touch of peach and stone fruit esters, with some lightly sweet caramel malts in the background. According to Andrew: "We've been told by industry critics that the 2 Brothers fold has a reputation for malt driven beers, but with some recent evolutions in our conditioning processes, we hope that BOOM! will break this paradigm."