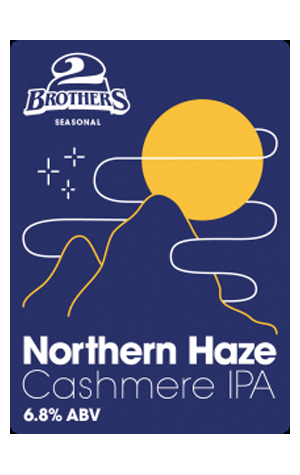 We typically don't trade in exclamation marks here at Crafty Towers, so when one's tasting notes end with: "So much hop depth!" it must mean a brewer has really gone to town on the little green marvels. And that's certainly the case here – and from a brewery you don't always think of first when it comes to punchy, hoppy beers.

2 Brothers' Northern Haze is their take on the West Coast hazy IPAs they encountered in the States on a recent visit, beers that look to combine the haze and heavy-handed juiciness of those from the East Coast while retaining the bitterness common to IPAs from their side of the country. And, given the aforementioned tasting notes also include the snippet: "Lots of OJ flavours but not juice like in texture – leaner and more like beer" it seems they hit their target.

In terms of specifics, the IPA features hefty amounts of citrusy new US hop variety Cashmere alongside Columbus, Simcoe, Centennial, Citra and Mandarina Bavaria and pours a hazy shade closer to copper than most local examples of hazy IPAs, as you might expect from 2 Brothers. You're hit by potent candied citrus / sherbet aromas, while there's something dank and weedy (of the smokable sort) lurking too. The Crystal malt seems to enhance the sweetness of the hops rather than taking away from their impact, while bitterness, even at 85 IBU, is well judged, adding balance and keeping the sweetness from running away.

tl;dr Go grab one while it's pouring fresh!