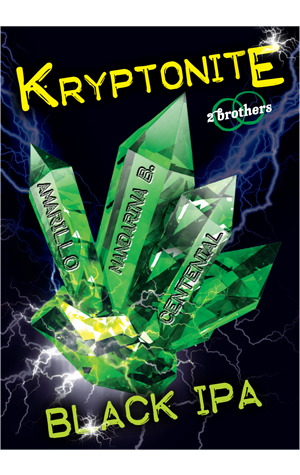 You have to love the generosity often found in the beer world. Late on Wednesday night, we received an email about a new beer from 2 Brothers that was going to be tapped at the brewery's Beerhall two days later. It was to be draught only (at least initially) but we thought we'd ask if there was any chance of getting a sample so we could list it on the website. Sixteen hours later, one of the brewery's reps rocked up at Crafty Towers with a hand capped bottle filled from one of the kegs complete with artwork strapped to it by a couple of rubber bands. Now that's service!

The beer itself is Kryptonite (clearly the 2 Brothers team is impervious to its powers) and is a collaboration they concocted with Victorian pubs The Park and Great Northern Hotel. It's the first IPA ever brewed by Andrew Ong and his team in Moorabbin and, they tell us: "definitely the best IPA we've made".

It's also a black one that features a trio of hops famed for their orange and citrusy character: Amarillo, Centennial and Mandarina Bavaria so leads with orange and grapefruit aromas. We also found something herbal and even a touch dank in the hop aroma too, perhaps from the way the hops are working with the malts required to create its deep black colour. There's a touch of dark cocoa there, even some berry / cherry action, while the flavour is again dominated by hops before signing off with a nicely rounded bitterness. And we'd have said that whether or not they'd gone to superhuman lengths.