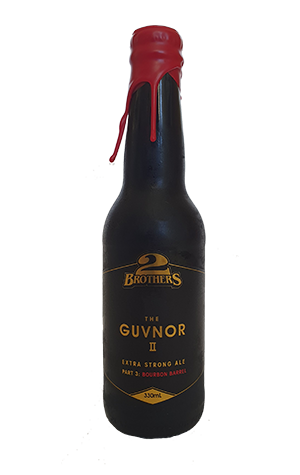 The Guvnor II series is an ongoing celebration of 2 Brothers’ tenth birthday, one that is appearing over time in four separate parts. The strong ale base beer has spent time ageing away in different kinds of barrels: the first was aged in French oak for six months; the second spending time in Starward whisky barrels.

For Part 3, bourbon barrels were the weapon of choice and, as a result, the beer shares more in common with its immediate predecessor than version one. It has a rich caramel sweetness, Christmas pudding like flavours of dried dark fruits and spice, along with a distinct vanilla character.