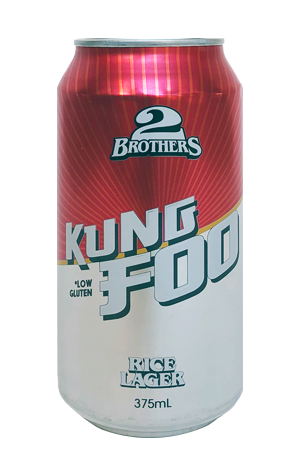 There's plenty of local breweries with lagers in their lineups these days, but it wasn't always the case. Moorabbin's 2 Brothers have been playing there for years, however, initially with the Taxi Pilsner before adding Kung Foo, a rice lager, to the lineup in 2012. It's been one of the brewery's best-sellers ever since, picked up a gold medal at the 2018 Australian International Beer Awards and, in the lead-up to summer 2018, became the first of their beers to appear in cans.

A bright golden colour in your glass, it's modelled on the pale lagers that have long dominated the planet in terms of consumption – clean, malt led and light on the palate, with a touch of residual sweetness and low bitterness – but offers up some subtle fruity hops to set it apart from its industrial brethren. It's also one of few rice lagers you'll find from Australian brewers; typically, the aim in using rice in such beers is to help keep them light on the palate but there's another aspect to it that the 2 Brothers team is keen to highlight at a time when more and more people are paying attention to their diets.

Switching a portion of the malted barley for rice reduces the gluten in the beer – they had a batch tested and the results came back with "no detectable gluten", meaning it has less than five parts per million. Thus, while they can't tag it gluten free under Australian guidelines as it has been made with gluten-containing grains, the cans come bearing "LOW GLUTEN" next to the name.