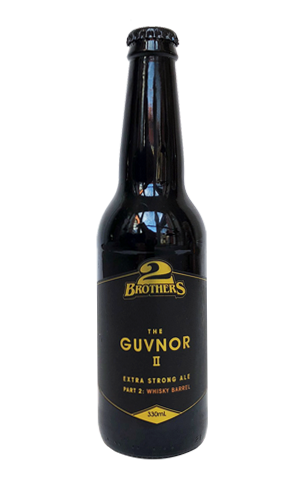 Late in 2017, as part of their tenth birthday celebrations, the two brothers behind 2 Brothers and their team launched a new version of one of their trophy-winning beers from the past, The Guvnor strong ale. There was a bit of a twist, however, as they'd split the beer into four parts, ageing them in different ways. Part 1 spent six months on French oak and has been followed by this version, which sat inside barrels obtained from Port Melbourne's Starward Whisky.

Thus, while Part 1 was softened by the oak, turning the base beer into something rich and creamy, here you've got a far punchier affair. There's plenty of dark fruits, rummy Christmas spices, almonds and marzipan in a beer that doesn't keep its whisky or oak character under wraps, instead letting off both barrels – or, perhaps more accurately, a 21 gun salute – of bold, bolshy, boozy flavours and aromas that feel destined for sharing post-dinner, possibly with cigar in hand, delivering a warming tickle on the palate that spreads slowly, like a nip of whisky, through the rest of the drinker.