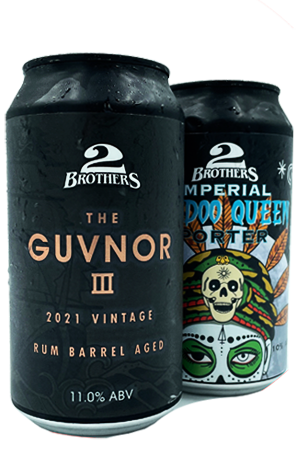 As autumn has progressed, brewers across Australia have been releasing beers to ease drinkers into the colder months – hoppy ambers, red IPAs, even old school ESBs. In the case of 2 Brothers, it seems they've decided to skip the season entirely and plonk themselves in deepest midwinter...

With The Guvnor III – 2021 Vintage, which feels a little like the naming convention from a horror movie franchise two decades in, they've revisited the world of barleywine – a world they've celebrated longer and more often than pretty much any other brewery in Australia. This time around, the liquid has been aged in barrels from JimmyRum on the Mornington Peninsula, although any impact from that process appears to be gentle. This, to all extents and purposes, looks, smells and acts like a barleywine. There's that sap like, deep amber appearance and characteristics that flow from toffee-soaked caramelised bananas through raisins to brown sugar, with a lingering, sweet and warming finish. I'd love to try it over a rum 'n' raisin ice cream.

As for Voodoo Queen, an imperial version of their Voodoo Baltic porter, if someone told you they'd added some sweet, dark spirit or that it had spent time in oak, you wouldn’t be surprised. Yet its creamy choc-caramel-fudge-molasses-cola richness is all beer. It's less weighty than the 10 percent ABV might have you expecting, but like the titular queen on the label, it’ll creep up on ya.