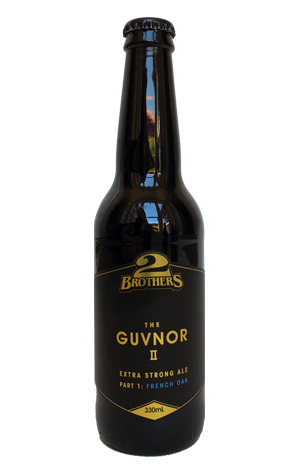 As 2017 comes to a close, another Victorian brewery is turning ten. This time around, it's the turn of Moorabbin's 2 Brothers, founded by brothers Andrew and Dave Ong. As part of their birthday celebrations, they're launching a special beer – one with a past and a future as well as a (birthday) present.

The original Guvnor was a 10.3 percent ABV English barley wine released in early 2011 that went on to take out that year's AIBA Premier's Trophy for Best Victorian Beer (much to the teetotal then Premier Ten Bailieu's disgruntlement when he was asked about it on the radio). The present one is a 10 percent ABV barley wine built with Scottish Golden Promise malt and American Amarillo hops that spent six months on French oak. It's rich, creamy and dessert like, a dessert laced with toffee and vanilla.

As for the future, well, this is the first of four extremely limited versions of the beer. Look out for Parts 2, 3 and 4 in 2018.