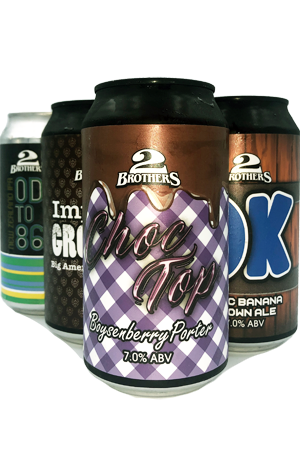 Back in March, brewers across the country who weren't already putting most of their beers into cans or bottles began scrambling to do so as venues closed. As the pandemic settled in, more ramped up their limited release schedules as the unique nature of our current situation saw more drinkers than before – which is saying something – chasing new, new, new.

It's a situation that's seen one of Melbourne's elder statesmen change their approach, temporarily at least. With their busy Beerhall closed again, 2 Brothers have put out as many packaged limiteds in three weeks as you'd previously have seen in six months or more. Ode To 86 isn't a tribute to the famous tramline but a nod to the storage warehouse they've been forced to give up due to COVID-19. It's also a far cry from Fixation's The 86 IPA; that one's a NEIPA, this is more in keeping with 2 Brothers' hoppy beer lineage - copper in colour and with some light caramel, sherbety biscuit sweetness there to balance and brighten the hops. It fair dances over the palate with its lightness, and is delightfully balanced with a red berry / ripe Jaffa hop character and a little herbal underbelly.

Fans of the brewery will know what to expect from Imperial Growler given it's a beefed up take on their flagship Growler American brown. That said, it's no darker or heavier looking, instead this red-tinged chestnut beer serves up a dusting of cocoa and dates / dried dark fruit aromas and flavours. It's rich without being gloopy, with plenty of chocolate of a fluffy cake ilk, a little hazelnuttiness and a toasty dryness there to clip its wings.

The other two new releases are both in the dessert category with Choc Top Boysenberry set to be the first in a series of choc top-inspired beers in partnership with Lido cinemas. The lactose-laced dark beer presents like a berry jam-flavoured ice cream sauce swirled with chocolate; its sweet and sticky flavours go on and on like an all night movie marathon.

2 Brothers' beer palette over the years has tended to leaner sweeter than most and that's arguably never been truer than with DK, another collab, this time with Bartronica. If anyone ever makes a beer with more foam banana / banana milkshake syrup character than this "Choc Banana Brown Ale" I'll be impressed. If you go hunting, there’s chocolate and a bubblegum fruitiness to be unearthed but, for the most part, this is all about satisfy the titular big ape.