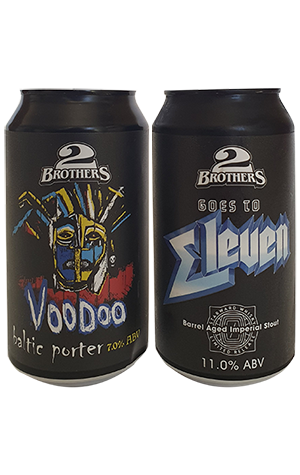 For winter 2019, 2 Brothers have released two dark beers in darkly clad cans. The lighter of those (which still sits at 7 percent ABV) is a familiar face, one the brewery has been releasing for the better part of a decade: Voodoo Baltic Porter. What pours from the can is also a familiar mix of flavours, with roasted coffee and chocolate, plus some liquorice, all delivered with a clean finish.

The second dark tinnie from the Moorabbin brewery is their GABS 2019 beer – a far denser affair that comes in at 11 percent. It’s also made with 11 different malts, 11 kilos of Galaxy hops and spent 11 months in Starward barrels, before being blended with the brewery’s Guvnor II strong ale and given the Spinal Tap-inspired name Eleven. Pouring the beer conjures another line from the same movie, while the beer itself is one that’s not at all shredding. Instead, it’s an incredibly smooth mix of chocolate liqueur, rich molasses, plum and a whisky finish.