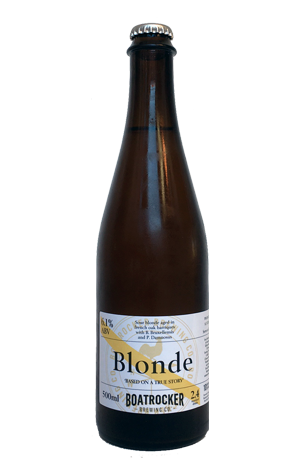 Oh, what fun it must be to be Boatrocker Brewery founder Matt Houghton or one of his brewers, making your way up and down aisles of barrels of varying sizes, sampling liquids of various origins and in various states of development, deciding which ones are ready for bottling, which need more time, which will need blending to make a marvellous final product, which would suit an addition of fruit or coffee. Certainly, there are worse ways to spend one's life.

The latest wooden vessel to be emptied of its juices is one of the large puncheons at the rear of the Barrel Room, a six-year-old piece of oak that had housed a Belgian style blonde ale and bugs of the Brettanomyces and pediococcus varieties for around 12 months. It's a combination of bacteria that gives the beer more of the "funk" than perhaps any other Boatrocker beer to date, barring the Brambic; there's the malt sweetness you'd associate with a Belgian blonde ale, but with it comes some tangy apple/pear acidity, not to mention some vinous and oaky notes from the puncheon and something reminiscent of the strange fruit that is durian.

All of which adds up to a beer that, like the wondrous Frank Ocean album of the same name, has much bubbling under its surface.