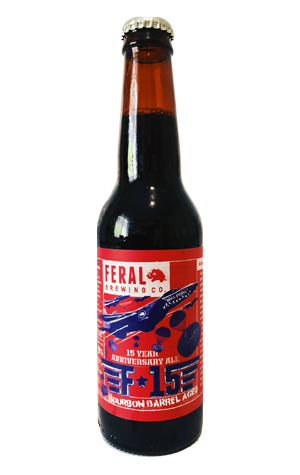 As the April days became shorter and cooler in the Swan Valley, a 6 percent ABV brown ale began a six month hibernation through the dark days of winter. This was no ordinary slumber, however, because this humble brown ale would be kept safe and warm in bourbon barrels from one of the most sought after distilleries in the world, Heaven Hill. It was awoken in October's spring sunshine, revealing an an elegant beer befitting the 15th anniversary of the Feral Brewing Co.

Clearly, much has changed during the long sleep – both for the beer and the brewery itself – yet it remains a testament to the brewing prowess of the the Feral team. Bourbon and oaky coconut aromas rise as off-white eddies circle the glass. The lighter than expected body disarms at first but this makes for a more drinkable beer that allows toasted characters, a slight oiliness and caramel to head towards a sweet finish dried by the holy barrel's tannins.

As has been tradition for recent single batch releases, the fighter jet on the label bears the name Will Feral, a very public acknowledgement of the efforts of head brewer Will Irving.

This super limited release will be available from selected venues and retailers from late October.