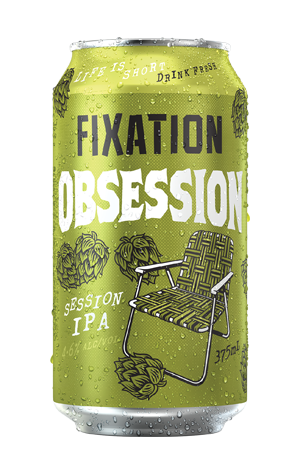 The mystery beer referred to in our December 2017 blind tasting write up? That was this, a session-minded addition to the Fixation lineup of IPAs. Slotting in as the little sibling to the brewing company's flagship IPA, Obsession is a session IPA (also referred to on the label as "where extra pale ale meets IPA") and gives Fixation fans a first sub-5 percent ABV beer.

Aside from the fact they nailed the name, the beer itself continues the brewing company's mission to focus on hops above all. Pine/spruce dominates the aroma alongside some citrus fruits, joined by some earthy, pine forest like flavours in a beer that's pretty light on its feet while still delivering enough drying bitterness to justify the "IPA" tag.

As mentioned above, we slotted Obsession into our most recent pale ale blind tasting to provide feedback to Tom "Mr Fixation" Delmont, one of our most regular judges from day one. Given the beer wasn't yet out in bottles (although had been launched on tap) and wasn't in the original tasting lineup we'd curated, to preserve the integrity of our tastings we didn't include the beer in the official results. Had we done so, however, with Tom's scores for all beers removed, Obsession would have slotted in second behind Nail's VPA, suggesting his partnership with the Stone & Wood brewing team is onto another winner.

Since launch, Obsession has gone on to rival the original IPA as the brewery's biggest seller and, as of winter 2019, is available in cans instead of bottles.

Find it at good independent beer venues and retailers nationwide