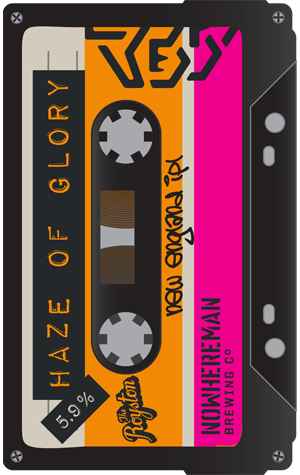 Announcing their Good Beer Week debut, West Leederville’s Nowhereman took 2018’s theme of the Ultimate Mix as a chance to honour the musical, and often metaphorical, love letter: the mix tape. While owner and chief musical director Reece Wheadon was designing the retro leaning decal, head brewer Paul Wyman was curating a carefully crafted celebration of New World hops by using what he describes as a “stupid amount of hops”.

Hi-fidelity aromas from Galaxy, Vic Secret, Mosaic and El Dorado hops ring clearly with sunny tropical notes. In making the B-side as strong as the opener, triticale, a wheat/rye hybrid grain, was used to create the subtle protein haze in the beer that anchors grapefruit, mango, melon and green papaya flavours with a firm bitterness. The result is a highly drinkable beer that demands repeat plays.

While the brewery teamed up with Melbourne’s Royston Hotel (the perennial WA home for Pint of Origin) for the launch of the beer during Good Beer Week, a limited amount of draught only Haze of Glory was kept at home. And, as with all new Nowhereman releases, any Crafty Cabal members who head to the brewpub on launch night (May 25) can get their Hazes of Glory (Haze of Glories?) for just $5 by flashing the appropriate offer at bar staff.