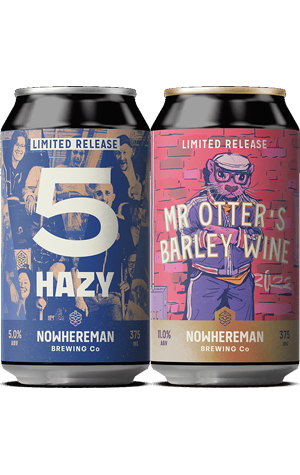 Midwinter 2022 saw Nowhereman celebrate their first half decade with a pair of beers that want to party, albeit with one more likely than the other to be up for an all-nighter than the other – although you can be the arbiter of that.

The official birthday beer, 5 Hazy may well be reflective of, dare we say, maturity, dialling back from their previous double IPA birthday beer space into a very drinkable hazy 5 percenter. Head brewer Eddie Still describes its party popper of five hops as “a global hop tour of fruit salad”, and there’s plenty to find if you’re looking: strawberry, ripe peach, pineapple, berry coulis, mango, pan-citrus and more. But, for most, there’s fun to be had, so just enjoy the vibe.

Across the dancefloor, Mr Otter’s Barley Wine – one of the five beers chosen by the brewery team for our Five Years In Five Beers feature marking their anniversary – returns for its third outing, remaining refined in Studio Papa’s "Guy Ritchie meets GTA" aesthetic, yet now adorned with some AIBA and Royal Adelaide golden bling. After last year’s deeper expression, 2022 arrives closer to the English-style debut with raisin, fruitcake and oak moving throughout the toffee-led Maris Otter base as the 11 percent ABV harmonises with the smooth affair.

Those curious about the development of previous vintages may find 2020’s aged integration now featuring sherry and quince paste notes, while the bolder 2021 release continues to present spice and banana bread hints. Now with his own annual winter feast party, Mr Otter will no doubt have far more to reveal over the coming years.