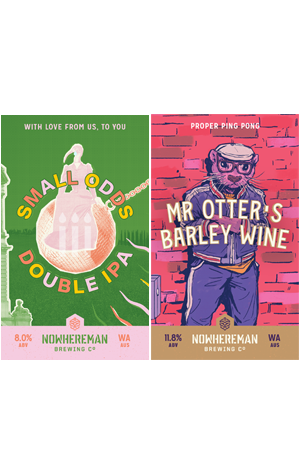 Although equally delicious, one of this pair is about to receive more attention. I’m sure that for parents of twins, especially non-identical twins, the love is framed equally, but outside the family home things are less impartial, as is the case with this double IPA and barley wine.

Small Odds will likely carry itself with celebratory third birthday cheer, charming and wowing those it meets like the wrecking ball on its label. Citrus – grapefruit, a little mandarin and candied lime – lead with toffee, which retains a lean, direct quality alongside an almost woody bitterness which rises, then rises some more, with a tongue-coating dryness.

Which leaves the other sibling. Looking like a Fantastic Mr Fox extra waiting for a Four Tet x Floating Points B2B set in an East Ender after hours club, Mr Otter’s Barley Wine may well be one of this year’s best labels, but what’s it taste like guv'?