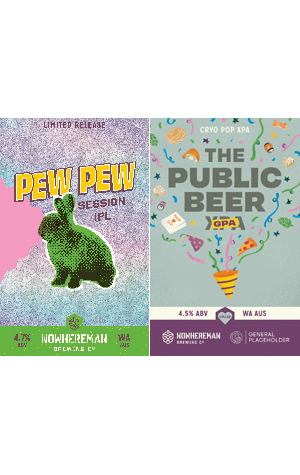 “The name is lasers, a bunny shooting lasers from its eyes, because why the hell not!”

That's Nowhereman’s Pia Poynton clearing up any vagaries around the West Leederville brewery’s latest release – or its name, at the very least. As for the liquid, Mosaic, Strata and Sultana hops work cleanly throughout with cohesive tropi-citrus appeal to deliver a very sessionable IPL, one whose only demand is that you say: "Pew! Pew!" loudly before each sip.

After an exhaustive name search for their latest venue collab, GPA seems, well, obvious. General Public Ale – a beer designed for the many and based on an XPA, comes loaded with just enough juicy CryoPop action to stir interest while still maximising sessionability. Bright citrus – lime, grapefruit and orange peel – lead with tropical touches in support, before a crisp, bitter close designed to pair perfectly with GP’s house made pizzas.

Both available from the brewery