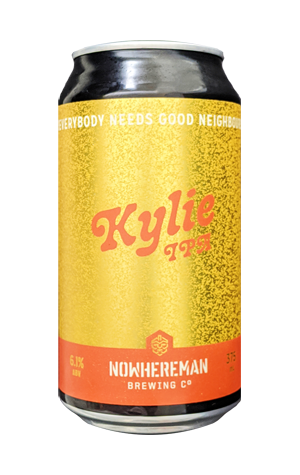 Naming beers can be a challenge. For every lightning bolt moment, there’s hundreds more birthed by compromise and frustration. And then there are others – like the beer at hand here – whose bragging rights owner doesn’t even remember dropping the name.

You’d think naming an all-Aussie hop IPA Kylie would stick in your mind but, for Nowhereman’s head brewer Eddie Still, the moment at which he yelled: “What about we call it Kylie?” from one side of the West Leederville brewer to the other during a workshop session was, well, forgettable.

What is not, however, is Kylie the beer. Kylie is juicy, without haze or adjuncts, and features a fresh range of tropical fruit (passionfruit, mango, pineapple), mandarin and candied grapefruit, with firm bitterness for stature and a dry close. I'll admit this took a few attempts to understand. Not that I was being forgetful, however. It was just that the sample disappeared before many notes were taken. As did the next one.

No, Kylie the beer is not forgettable. She’s just very enjoyable.

Available from the brewpub and Nowhereman stockists in WA