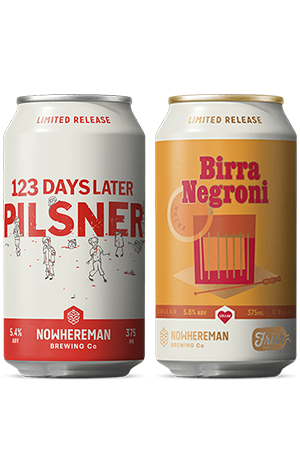 Extended cold conditioning, or lagering, provides pilsners with an opportunity to settle, develop nuance and, ultimately, elegance. While the Czech archetype typically spends around 40 days cold chillin’, Nowhereman have tripled that, in what another brewer noted as very pleasing "lagering arms race" going on in WA. And why not put some zombies on the can for a little cinematic contagion?

Originally brewed back in July, 123 Days Later there’s inviting clarity, and a bready nose flecked with noble hop signatures. The tease of malt sweetness is soon rinsed with a classy dry / bitter wash, one that lifts a moreish spicy hop allure – the kind of celebratory crusher which befits finishing a day of slaying, be that spreadsheets, or the undead.