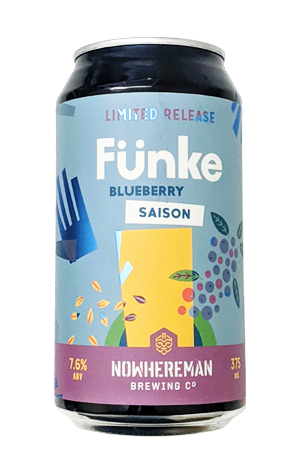 After becoming thoroughly distracted, and laughing audibly for far longer than I should have, I was overcome with a sense that I needed to be doing something. That something was writing about Fünke the beer, not researching Fünke the fictional, confused-yet-loveable David Cross character from cult series Arrested Development. So, so many quotes, but removed from the context of this modern comedy classic, magic like “I blue myself” may not land as intended.

But this, of course, is the Fünke way, and Nowhereman’s blueberry saison perhaps echoes its inspiration. While convinced of its own deft grace, the reality is far more overt, as evidenced by the lurid dark purple pour – 500 kilograms of blueberries will do that to a beer. White pepper and feint clove dance throughout, while oak vanilla adds a little sparkle before the whole arcs dry, yet never nude, as purple stains the glass.

And Nowhereman stockists across WA