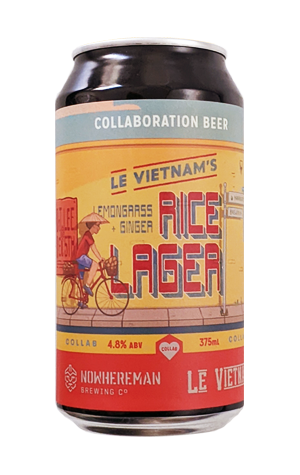 Vietnamese for sandwich or bread, bánh mì is the French influenced Vietnamese street food which grew out of the political challenges of its mother country, then spread globally from the late 70s onwards via expat cuisine. When DJ Lee opened Le Vietnam in Perth’s CBD in the early 2010s, there was little local bánh mì food culture; however, his obsession, along with regular research trips, spawned a WA institution. It’s also one which has nourished every Nowhereman collab brew, a relationship than developed into an occasional Sunday kitchen pop-up at the brewery, and now this bánh mì-inspired beer.

Unmistakeable lemongrass aromatics lead with a ginger base note, although without its bite, before more of the same on the tongue. This, like the bánh mì itself, is all about balance, and with bold adjuncts swirling through a light-bodied rice lager base, there’s still extraordinary drinkability; in fact, it’s hard to put the glass down. Food pairings are obvious, yet this crisp lager’s standalone enjoyment is delightful.