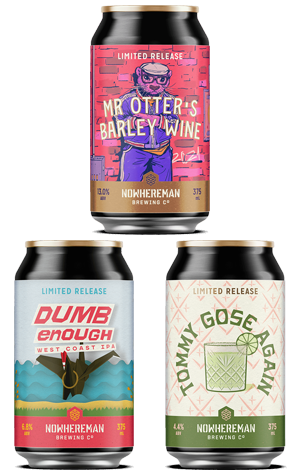 Nowhereman celebrate their fourth birthday with a trio of tins featuring iterations that will be familiar to fans. Leading with this year’s largest – because what four-year-old wants to open a small present first? – Mr Otter’s Barley Wine 2021 sees the astute, hirsute malt master bump the ABV up to 13 percent thanks to an enthusiastic English yeast strain. Pouring a deeper mahogany hue than 2020, Mr Otter’s is all vanilla Jersey Caramels, with dried fruit dissipating into an unmentioned American oak coconut influence, its wood grain presence tight, dry and textural through the third act.

Celebrating in its own fashion, Dumb Enough receives a canned outing after featuring as a well-received draught offering last year. Hilltop Hoods referencing, it delivers an old school, bitter, piney wallop atop a modern yet malty base, with Nowhereman’s signature grapefruit appearing alongside pineapple in support.

And, proving the NWN team welcome all libations to the party, Tommy Gose Again returns to Nowhereman’s first sour beer, a riff on the famous Tommy’s Margarita, itself a riff on the Margarita. An inviting lime and brine nose leads, with a hint of coconut and pineapple, which I seem to get with fresh cut lime. The tequila’s edge is subtle, zing-refreshing, while a touch of oak lifts the game.

Available from the venue

And via WA stockists