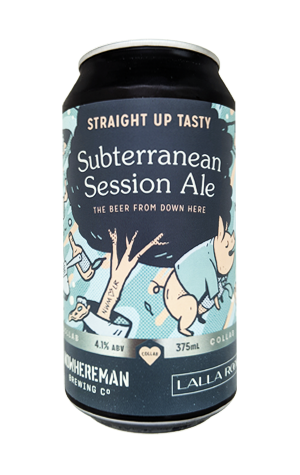 Playfully described as “Beer From Down Here”, Subterranean refers to Lalla Rookh’s clandestine location below St Georges Terrace, in the heart of Perth’s financial district. Here, below the city, the venue serves considered Italian fare while the enoteca provides deep cuts from the fruit of vine.

While crafty beer options are available, post-shift the team tend to seek a refreshing local crusher: something with style and technique while saving complexity for the next drink. They, like many of their punters, seek a session ale.

Working with the Nowhereman team they’ve created a delicately hoppy ale, showcasing light grapefruit and pineapple, courtesy of Vic Secret and Wai-iti hops, before closing dry and moderately bitter. Fans of both venues will enjoy Studio Papa’s label art which features many elements from Lalla Rookh and Nowhereman, including a pig, pasta, ficus, pizza and more.

Launched at Lalla Rookh on February 13

On tap at the venue and Nowhereman