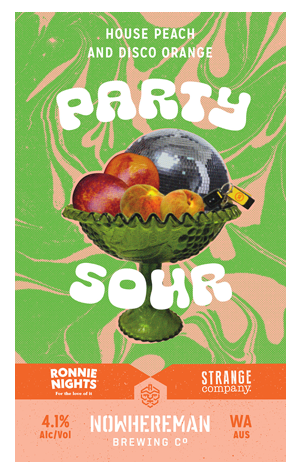 When the decal art direction to Studio Papa is: “fruit, a disco ball and Madonna’s Holiday” you get the idea before even taking a sip. This collab, the first of a planned year-long Party Sour range, captures the vibe of one of WA’s great party joints, Ronnie Nights. It’s fun, fruity and should be consumed with glee while dancing with friends and generally talking too loud. That said, it’s also very likely to work well in Strange Company’s more considered environs and the West Leederville brewery’s warehouse aesthetic but, if we’re honest, Party Sour is all about Ronnie Nights.

On debut, Party Sour is imbibed with 80 kilograms of blood peach and a touch of blood orange for good measure because blood oranges like to party, right? The haze-tinged, peach hue holds a clean sour that’s moderately redolent of its adjuncts and designed for maximum crushability, all while dancing with friends and talking too loud, of course.

Party Sour is available exclusively from Nowhereman, Ronnie Nights and Strange Company over the next 12 months, with regular fruit changes