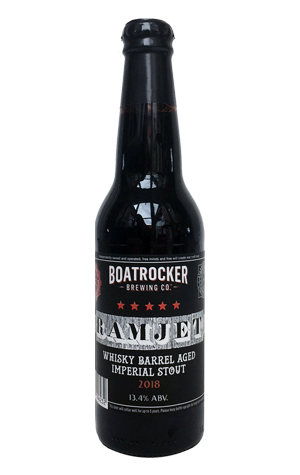 Since its first appearance back in 2013, Boatrocker's flagship Ramjet has ploughed a familiar path. The imperial stout is always aged in Starward casks before blending. It picks up a combination of people's choice and beer competition awards. It causes a buzz upon release (especially since the brewery started its annual Ramjet Day). And it tends to spawn ever more variations (with Dramjet a new addition in 2018).

It does change a little too, however, most notably, it seems, when it comes to its potency. When it debuted, its 10.2 percent ABV put it among few local beers heading into double figures; in 2018, this has risen to 13.4. You can't help but wonder if adding one-third more booze content to a beer might tip it into hot or unbalanced territory, yet there's little cause for concern. Sure, the whisky might be a little more prominent while it's young, but elsewhere that familiar mix of velvet texture and decadent dark chocolate supported by a little oak and coffee lets you know you're in good company. You just need to be aware you'll be a third more tipsy by the end of the glass...