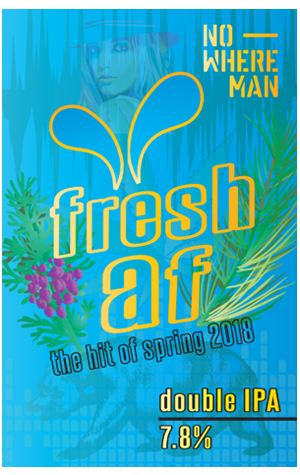 And then another one... Fresh off the back of Rhapsody XPA, Nowhereman return with their biggest beer yet, the Fresh AF Double IPA. Whether intentional or not, it's a beer adds credence to a growing local movement towards DIPAs with lighter malt profiles; an Australian DIPA style, perhaps?

Exclusively using Joe White's new Signature malt - a high end, single region origin Australian barley you can read about here - as a base, Cascade, Centennial, Amarillo, Chinook and Eureka hops are then employed to create a modern interpretation of a classic style.

While there is a slightly viscous body, Fresh AF isn’t sweet; instead pine, orange and grapefruit provide a firm bitterness and balance to a highly drinkable beer that'll get the party started like pop drops from the Golden Age of So Fresh, the era that inspired the beer's accompanying artwork.

And select WA outlets on tap and for growler / CANimal fills