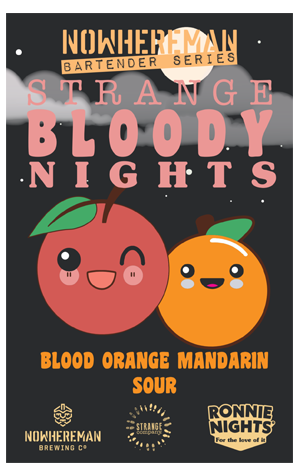 Pushing the postcodes of collaboration, Nowhereman invited the combined teams of Fremantle sister venues Strange Company and Ronnie Nights to develop a beer that best represents the venues. The lively siblings share a fondness for using shrubs, a type of vinegared syrup, in cocktails. So, in paying homage to this, an Oleo-Saccharum technique was used in which citrus peel is sealed in sugar to draw the oils into an increasingly concentrated citrus syrup.

While all of this sounds rather fancy, the kettle soured beer also includes the relatively simple addition of mandarin and blood orange juice, which has resulted in a very cute, peach blush coloured beer. The citrus additions translate well but don’t overwhelm and nor does the summery tartness. Whether intentional or not, the technique and combination of flavours is probably best expressed by the ruby grapefruit-like burps as the glass empties – and it should be noted that this is intended as a compliment!