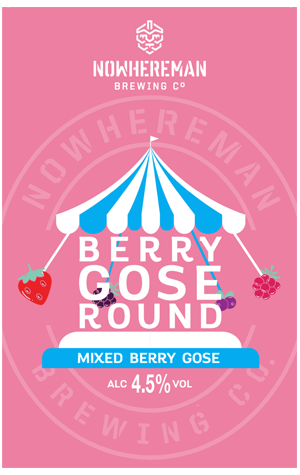 It appears Nowhereman have settled into something of a brew-groove, with this their fourth fruit sour in as many months. Having previously explored beery cocktail expressions and student party enablers, Berry Gose Round may be their most approachable fruited beer yet.

In loading up 80kg of strawberries, blueberries, blackberries and raspberries, they've created a pretty pastel pink beer. Of the summer fruits, raspberry and blueberry shine brightest while the restrained briny balance mingles with the fruit acidity and enjoyable lactic twang towards a crisp finish.