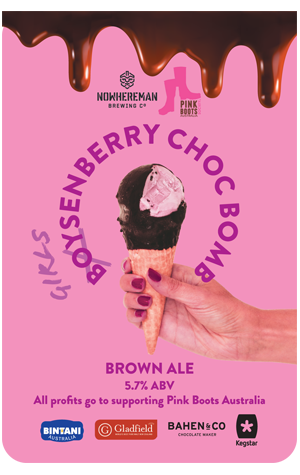 Marking International Women’s Day 2019, 20 ladies from Pink Boots WA – a collective that celebrates and empowers women in the beer industry – got together at Nowhereman to brew what has been playfully dubbed Girlsenberry Choc Bomb Brown Ale. Their beerific riff on the classic choc bomb ice cream was imbued with 100kg of boysenberries and 26kg of cacao husks from Bahen & Co artisanal chocolatiers. Support was also provided by Bintani, Gladfield Malt and Kegstar, with all profits donated back to Pink Boots Australia.

Leaving no doubt about the boysenberry addition, the collaboration has taken on a stained hue and lifted fruity aroma. In the glass, every element is defined and yet cohesive, swirling through the lactose-infused brown ale base beer with an almost creamy mouthfeel which mimics the ice cream, save for the balancing bitterness.

The cacao husks and malt interplay has contributed a Coco Pops milk flavour and there’s a suggestion of vanilla, but that may just due to the childhood memories that start flooding in as the glass is drained.

Plus the Royston Hotel and Two Birds Nest during Good Beer Week 2019.