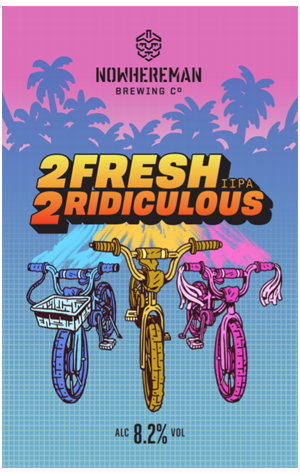 There ain’t no party like a Nowhereman party! The West Leederville brewery decided to celebrate their second birthday with double IPA and a decal that riffs equally on the Fast and the Furious, Stranger Things, The Goonies and the So Fresh hit music compilation series – that’s a lot to take in while sipping a 8 percent ABV beer, none of which should be taken seriously.

Beginning as an iteration of last years’ Fresh AF, 2Fresh 2Ridiculous could easily be labelled a hazy IIPA. The opaque orange birthday beer sits plumply in the glass with zero regard for allowing light to pass through it. Massive fruity aromas begin with mango and apricot before ruby red grapefruit takes the lead and continues to dominate through the palate thanks to the Galaxy and Mosaic hops.

Unlike its NEIPA counterparts, bitterness arrives immediately and sticks around, along with a textural hop matter character that plays off juiciness, without the weight of adjuncts, before a dry coda arrives to see things out. Inadvertently, it’s a conflux of the beer world right now, one that, like the decal references, is 2Fresh 2Ridiculous.

Available from the brewery from late July and select WA venues and growler filling retailers from IPA Day, Aug 1