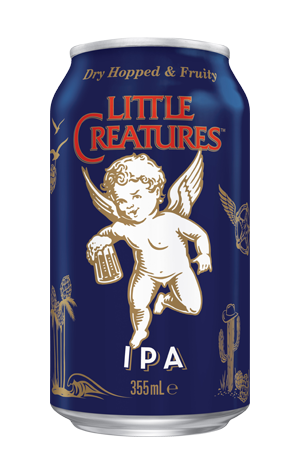 Nearly twenty years on, there is something cute about Little Creatures' reworked IPA. Lining up nicely with the opening of the brewery’s San Francisco outpost, IPA 2019 draws from the very environment that inspired cherub-fronted fermentation inside an old crocodile farm in Fremantle. Gone is the English-leaning IPA recipe and in its place is a very modern West Coast IPA featuring a suite of seven variously classic and hyped US hops.

As a result, bright tropical, stonefruit and citrus characters roam throughout the lean, dry beer, making this a very crushable, canned IPA. The 6.4 percent ABV carries over from the original IPA recipe, hitting that IPA sweet spot of style presence and sessionability for those into bigger beers; let’s remember this is a considerable a jump from one of their Freo best-sellers, Elsie – or Furphy for that matter.