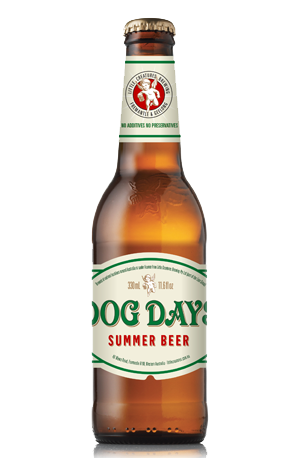 As an opening salvo for its new Seasonal series, Little Creatures came out all guns blazing with Return of the Dread, the foreign export stout we fully expect will be among many people's favourite beers of the year. Now, as the mercury starts to rise in earnest, they're back with number two: a beer that is pretty much the polar opposite of the Dread. Where the Dread was relatively high in alcohol, Dog Days measures an easy-going 4.4 percent ABV. Where Dread was a dense, malt driven beast, Dog Days is a sprightly affair that lets its hops do the talking.

It's tagged as a "Summer Beer" and will slot into the pantheon of popular Aussie-brewed summery beers that's been expanding in recent years. The flagship in this area has been Stone & Wood's Pacific Ale, but if you're after a reference point for Dog Days, it's more akin to Boatrocker's Big Love Suburban Pale (formerly SMASH). For, despite the brewers at Creatures' spiritual home in Freo favouring American hops in Dog Days (Cascade, Summit and Mosaic for those that like to know) as opposed to Boatrocker's all Aussie lineup, the outcome is a beer with similar peachy, tropical hop aromas and flavours as well as a resinous character to its surprisingly bitey bitterness. There are grassy, almost wet hop, aromas there too in a beer that is essentially a refreshing mouthful of hops. And we imagine that, as summer approaches, "refreshing mouthful of hops" is just what many of you will be after.

Available widely across Australia throughout summer 2015/16