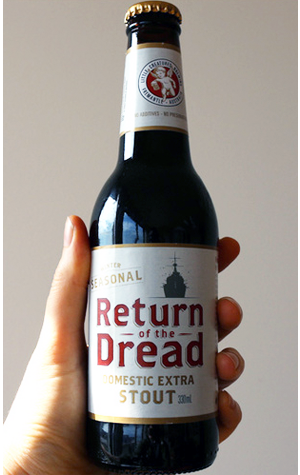 As they prepare to commence building the new venue for sister brewery White Rabbit at their home in Geelong, there's another change afoot in the world of Little Creatures, albeit not such a dramatic one. They are introducing regular seasonal releases in 330ml stubbies from the Creatures brew crew, with the first setting sail for winter.

Their first builds a clear bridge between the past and present as they've chosen to revisit one of their earliest and best loved Single Batches, the Dreadnought. The original came about as part of an in-house challenge to brewers to come up with a dark beer; the result was a top notch 7.4 percent, black as night treat. The Return of the Dread is a similar beast: seriously black and almost as strong as its inspiration. It's best enjoyed close to room temperature to allow the body to fill out and coat your mouth and the full array of roasted malt, dark chocolate, charred nuts, dark treacle – and a touch of fruitiness – to come into play. There's a lingering, roasted bitterness bringing down the curtain in what's another tight, balanced winter warmer from the Freo team. And we say this despite it bringing back memories of this...

NB This first stated that they were stopping their Single Batch releases. We're told these will still continue.