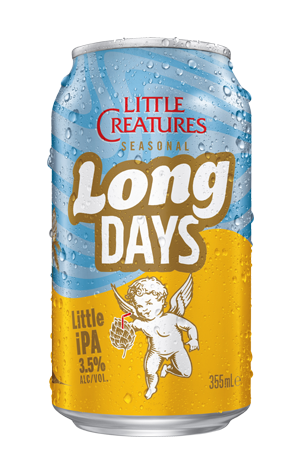 In the early Aughts, Little Creatures created Rogers’, one of Australia’s best-known mid-strength beers – well, almost mid-strength as it's an amber that sits at 3.8 percent ABV. Nigh on twenty years later, the brewing cherubs have unveiled their entry into the modern low ABV arena in the form of Long Days, a "Little IPA", which reflects how far the market has changed.

Dry-hopped with Cryo Simcoe hops, Long Days' easy-drinking appeal shows passionfruit and citrus with a subtle pine base, yet keeps bitterness at rather tranquil 20 IBUs. These rise slightly in perception through the crisp finish, not that many will be too concerned as they crack another tinny during the long days of summer.