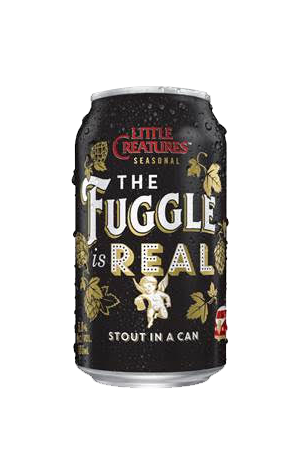 It's fair to say Little Creatures has much to live up to when it releases a winter seasonal thanks to a run of stouts based around a few variants on the Dreadnought that first appeared as a Single Batch back in 2011. And they're off to a good start with this one as the news their 2018 seasonal was called The Fuggle Is Real landed within days of this year's Good Beer Week finishing, a time when many in the beer world can be heard muttering that the struggle really is real (if often self-inflicted...).

As for the beer – their first dark beer in a can – it makes a feature of traditional English hop variety Fuggle and newer US variety Loral, one that combines New World aromatics with an Old World earthy, spicy underbelly, both of which are joined by house favourite EKG and a touch of Southern Cross. They've been put to work alongside roasted and specialty malts to create the sort of stout you'd expect from the Little Creatures team in Freo: floral aromas accompany the roasted barley, dark caramel and chocolate on the nose; the bitter chocolate and roasted flavours are underpinned by those earthy, spicy flavours; and the whole thing's wrapped up in an oat-assisted soft, pillowy body and brought to a close by a dry, woody finish.

All in all, a struggle you'd happily take on.