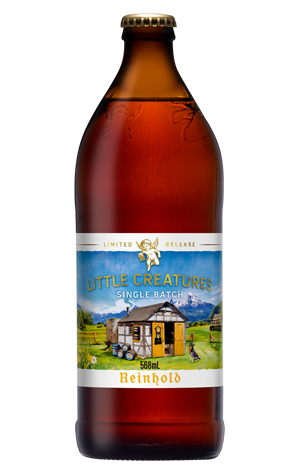 They like to flit around the beer spectrum with their Single Batch releases at Little Creatures and here, after a couple of highly hop forward releases and the return of the Dreadnought, they aim for one of the spectrum's lesser visited realms. Reinhold takes inspiration from Germany, in particular the region around Dusseldorf. There, you can find beers called altbiers – or "old" beers – dark brown, malty and often packing a drying, spicy bitterness. Occasionally brewers will create a Sticke Alt, or special version, you're said to have to request from their secret stash – and that's where Reinhold comes in.

A tribute of sorts to the brewery's Rogers ale – see a story on that beer on the site soon – it's a bigger, richer, hoppier take on the altbier style. It pours a deep chestnut colour and leads off with creamy toffee, sweet cake batter and raisin like fruit aromas. It's full body and spiciness suggest there's a fair whack of rye malt in there, but we're told its character is created instead through other specialty malts and a combination of Old World European hops (presumably added in sizeable amounts given the lingering bitterness they create). It finishes with a toasted dryness and a prickly boozy tingle too.